While many of the new spectrophotometers on the market today are equipped with a USB cable to connect to the PC, most of the older models still use a serial communications cable to communicate with the PC.  USB to serial adapter cables can bridge the gap for those PC's that do not have a serial port installed on their PC. There are many such devices available, but not all work well with the high demands of data transfer of a color spectrophotometer--especially not on a 64-bit PC.

This blog post updates our recommendation for a USB adapter that works well under Windows 7 on a 64-bit computer.  Many of the USB adapters on the market do not have a driver that works under a 64-bit operating system.  We’ve tested and found the Belkin F5U-257USBto Serial Adapter Cable to work with most spectrophotometers under the following configurations:

The driver was automatically found on each of these operating systems and communications was established with the color sensors.  This is the cable that we are recommending to OnColor users. 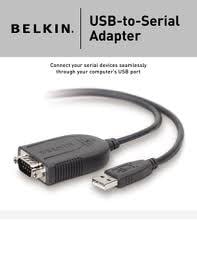 For those users that have the older model, Belkin F5U-409, a driver exists that will make that device work on the listed Operating Systems, too.  It can be found on the OnColor installation CD under the \Support folder in the current release of OnColor.

The Belkin F5U-257 is readily available from many On-Line stores.

The original blog on this topic contains some good advice for installing this adapter.