Not so funny is the frustration and confusion many working in color measurement experience due to the persistent misuse of terminology. "Why don't my color numbers match?" is a question we hear often.

The Many Angles of Color Measurement

Probably the most common misconception is about the 2° and the 10° observer.  This frequently gets mixed up with the geometry of the measuring instrument with users saying they measured the color at 10° using D65 illumination, when in fact what they measured the sample with was a 45° /0°  instrument using tungsten illumination. The 10° comes into play with the Standard Observer they chose for the tristimulus weighting functions.

There are two areas where these angles come into play and it's easy to see how they can become confused:

The first is the instrument geometry and how the light source and detector are positioned relative to the sample. 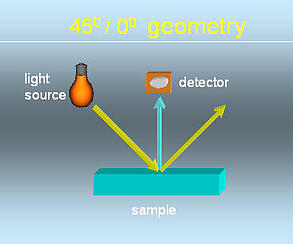 The 45°/0° refers to the geometry or optical design of the measuring instrument, be it a colorimeter or a spectrophotometer.

The most common instrument geometries used today are either 45°/0° or d/8°.

The instrument geometry is described by a pair of angles or letters. The first letter or number in the pair is for the angle of illumination; the second is for the viewing angle (or the angle that the light is detected). 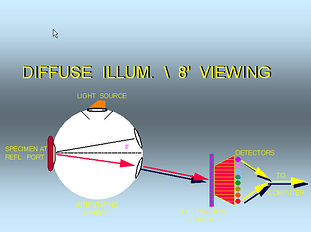 The second term in d/8° stands for the angle of viewing which is 8° off the normal.

This seems to be where all the confusion is centered. These angles refer to the Standard Observer and have nothing to do with the geometry of the instrument or the angle at which the samples are viewed. 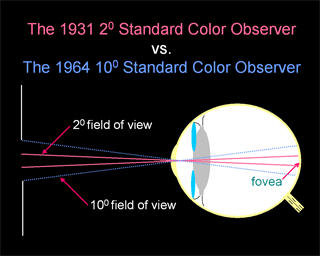 The color of consistency

In industrial color control, the 10° Standard Observer is recommended because it more closely approximates the size of samples being evaluated, but you'll still find lots of standards and procedures using the 2° Observer.

And now, if someday you're out at the ballpark and someone asks you, "Who's on first?" you'll know to just tell them, "Yes," and let it go at that.